A History of Expert Witnesses in Federal Courts 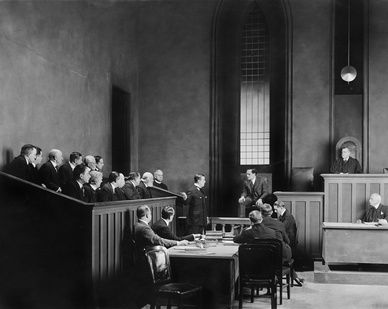 Expert witnesses have been a part of litigation for longer than many people realize.

In fact, the earliest time that an expert witness was known to take part in a lawsuit was in 1782, when an engineer testified in court in England. See, e.g., Yorkshire Reporter, “John Smeaton,”Jan. 22, 2014, available at http://yorkshirereporter.co.uk/john-smeaton/, (last visited Nov. 22, 2017).

This article discusses the history and evolution of expert witness participation in United States cases and how federal standards have addressed that participation over the years.

At that time, the testimony of an expert witness was at issue in a criminal case, but the standard that later emerged from the case affected more than simply criminal law. See generally id.; See Thomas Lyons, “Frye, Daubert and Where Do We Go From Here?”, Strauss, Factor, Laing, & Lyons, 2017, at http://www.sfandllaw.com/Articles/Frye-Daubert-and-Where-Do-We-Go-From-Here.shtml#N_37_ (last visited Nov. 22, 2017).

The expert evidence at issue in Frye involved the defense introducing a polygraph to prove the innocence of the accused party. See Frye, supra.

In addition to the polygraph itself, an expert witness was offered by the defendant’s attorney to explain the results of the polygraph test and what their significance was, in terms of establishing Mr. Frye’s innocence of a crime. See id.

That standard was that “while courts will go a long way in admitting expert testimony deduced from a well-recognized scientific principle or discovery, the thing from which the deduction is made must be sufficiently established to have gained general acceptance in the particular field in which it belongs.” Id., at 1014.

Interestingly, Frye did not set a national standard that many believed to for approximately fifty years. See Thomas Lyons, supra.

Although it was cited fifty-five times from 1948-1973 in federal courts, its acceptance did not seem to peak until 1975, right before the Federal Rules of Evidence (FRE) were amended. See id.

The implication of Frye was that scientific testimony by expert witnesses should be constrained to opinions that are generally accepted in the scientific community. See, e.g., id.

Some of the problems with Frye were that it did not necessarily apply to all experts, it was unclear to some courts if it included civil cases or not, and many legal scholars and courts struggled with how to interpret “general acceptance.” See id.

In fact, it appears that Frye was not even cited in a civil case until 1984, and the US Supreme Court “never rendered a decision interpreting the Frye rule, though it did cast some doubt on Frye's vitality.” Id.

Questions also arose as to whether Frye applied to all expert testimony, and they were not consistently resolved. See, e.g., id.

It was not until 1975 that Congress, via the Federal Rules of Evidence (FRE) provided a standard for expert witnesses, in Rule 702. See id.

At that time, the federal rule only applied to “scientific or technical knowledge,” so its application was limited, in terms of which types of experts it applied to. See, e.g., id.

It appears to be a partial acceptance of Frye, and states that: “If scientific, technical, or other specialized knowledge will assist the trier of fact to understand the evidence or to determine a fact in issue, a witness qualified as an expert by knowledge, skill, experience, training or education, may testify thereto in the form of an opinion or otherwise.” Id., citing FRE 702, 1975 version.

However, the FRE Advisory Committee does not even mention Frye in the notes regarding Rule 702, which caused some confusion. Some states still use Frye as their evidentiary standard for expert witness testimony, but the majority do not. See, e.g., id.

As one legal analyst explains, during the period following the 1975 adoption of FRE 702, “ [T]he foundational federal law seemingly went overnight from cryptic to nonexistent. Litigants, federal judges and scholars promptly began churning up ideas, arguments and decisions on whether the new rules embodied the Frye standard, established a new standard or created a hybrid Frye standard.” Id.

In considering voice spectrography technology and expert evidence, the Williams court held that “the applicable considerations are ‘probativeness, materiality, and reliability of the evidence, on the one side, and any tendency to mislead, prejudice or confuse the jury on the other.’” Id.

Accordingly, “the Second Circuit backhandedly rejected the proposition underlying Frye that courts should let the state of the art develop before granting it evidentiary reliability.” Id.

Williams rejected the evidence at hand as being “junk science.” See id.

What may be most pertinent to the Williams decision is that it signaled a federal departure from Frye and paved the way for other federal courts to respond similarly.

Notably, the Third Circuit relied upon the standard articulated in Williams and added its own list of standards to determine the admissibility of expert testimony. See id.

Again, the Downing court ultimately adhered to a “reliability” test, very similar to the one mentioned in Williams. See id.

Many federal courts attempted to follow Frye, but circuit splits became an issue, and the questions regarding when admissibility standards for experts applied, to whom they applied, what the rules should be, and how to interpret a given set of guidelines, persisted. See, e.g., id.

That case, Daubert v. Merrell Dow Pharmaceuticals, was a landmark decision for federal courts, and the standard it set forth has also been adopted by a majority of states. See, e.g., id.

One noteworthy aspect of Daubert was that not only did it address the admissibility of expert evidence, but it did so in the civil context.

Although Frye and its progeny were applied by courts in civil cases, having the Supreme Court weigh in on expert evidence in a civil suit made it clear that whatever standard was established applied to such cases.

The Ninth Circuit had used the “general acceptance” test articulated in Frye and similar cases, so Daubert presented a departure from that.

Daubert held that the FRE had actually rejected Frye, which resolved a question of what the Federal Rules had intended to accomplish. See id.

The Daubert guidelines are similar to what Williams and Downing attempted, and they consist of four issues for factfinders to consider:

Accordingly, once Daubert was decided, it became the federal law of the land for any case involving scientific or similar expert testimony, and many states adopted its standard, as well.

Since Daubert, courts and members of the legal profession have questioned whether it applied only to scientific testimony.

This issue was finally addressed in 1999, and the US Supreme Court held that the Daubert rules applied to any expert witness testimony in federal court, scientific or not. See Kumho Tire Co. v. Carmichael, 526 U.S. 137 (1999).

Kumho Tire, the case that applied Daubert’s criteria to all experts, also held that courts could consider other factors aside from those mentioned in Daubert, and it expressed approval of trial courts using their discretion to perform this gatekeeping function. See generally, id.

To date, states have generally followed the federal standards, though a handful have retained Frye, and some even have their own rules that are hybrids of previous federal standards or compilations of their own opinions on the matter.

Expert witnesses perform an indispensable role in litigation, and their prevalence in lawsuits only increases over time.

In federal cases, the Supreme Court has clarified how federal courts will determine whether expert testimony is admissible, and experts and their attorneys may be interested to know the many years over which those standards evolved and became codified in later versions of the Federal Rules of Evidence.