Can A Fact Witness Provide Expert Opinion When Not Designated as an Expert Witness? 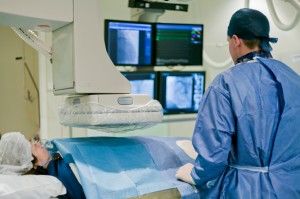 In recent case in Georgia, a medical patient and spouse filed a medical malpractice action against a doctor and his cardiology practice.

Plaintiffs alleged that he was badly burned by exposure to a high dose of radiation during a cardiac catheterization and intervention procedure performed by the Doctor in 2008.

At trial, the jury found in favor of the Defendants.

The Plaintiffs appealed and argued that the Defendants did not comply with their obligation to state that an identified fact witness would provide an expert opinion during discovery.

As a result, Plaintiffs claimed the trial court should have excluded the expert testimony, postponed the trial to allow them to interview the witness, or declared a mistrial.

Although the record didn’t contain Plaintiffs’ discovery requests, the parties appear to agree that the defendants identified the an individual, who is a physicist in the radiation oncology department and the hospital’s radiation safety officer, as a fact witness rather than an expert witness.

In the consolidated pretrial order, both parties listed the physicist as a “may call” witness. But at trial, Plaintiffs asked the court to exclude the testimony of the expert physicist ‘s on the issue of the amount of radiation that Plaintiff received during the procedure.

Plaintiffs argued that the physicist ‘s opinion on that issue would be based in part upon hearsay data—information from an outside company that hospital contracted to perform tests on its radiation equipment.

Defendants’ counsel responded that the requirements of Georgia Statute § 9–11–26(b)(4)(A)(i) didn’t apply to the physicist ‘s opinion on the radiation dose issue because he was a fact witness in the case.

Defendants’ attorney argued that the physicist had been deposed as a fact witness in his role as the hospital’s radiation safety officer; in that role, he investigated Plaintiff’s burn by making calculations regarding Plaintiff’s radiation dose based on information he received from the outside company.

The defendants’ attorney told the trial court that physicist ‘s testimony was “not going to be some expert opinion that is independent … of the work that he did in investigating this particular situation.”

The trial court ruled that the physicist could “give expert opinions about what he was doing as a fact witness[,] … based on what he determined as a fact witness,” even though those opinions might be derived from hearsay.

The trial court also found that this testimony wasn’t a surprise to Plaintiffs.

Plaintiffs’ counsel cross-examined the physicist on those issues.

Judge Christopher J. McFadden of the Georgia Court of Appeals wrote that the appellate court agreed that § 9–11–26(b)(4)(A)(i) did not require Defendants to identify the physicist as an expert witness. That Code section “applies only to experts whose knowledge of the facts and opinions held were acquired or developed in anticipation of litigation or for trial, and not to an expert witness who is in fact an actor or observer of the subject matter in the suit.”

The physicist investigated the amount of radiation Plaintiff received and reached an opinion on that issue in his position as the hospital’s radiation safety officer.

Judge McFadden wrote quoting early an earlier Court of Appeals case that, moreover, “[t]he purpose of identifying witnesses is to eliminate the possibility of surprise to each party.”

The judge noted that the record reflected that Plaintiffs questioned the physicist about the radiation dose issue at his deposition.

With that, they could not claim surprise by his testimony.

The Georgia Civil Practice Act did not require Defendants to identify the witness as an expert.

As a result, the trial court’s decision was affirmed, and it did not err in allowing the expert testimony.