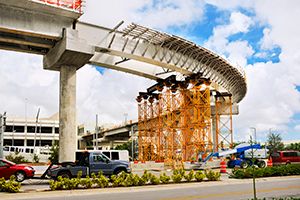 Many structural failures, from ladders to airframes, are caused by defective mechanically-fastened joints, resulting from either poor fastener manufacturing quality or improper installation. Many fastener specifications permit up to 4% defectives per batch, many of which may be missed by the installer. Fasteners installed out-of-grip and poor hole preparation also account for many of the defective joints. Additionally, published joint allowables may not reflect field conditions with respect to hole preparation, hole size, or panel strength. As a result, actual joints may have inadequate safety margins. These defective installations form the locus for eventual failure.

Structural failures can oftentimes be traced to a defective mechanically-fastened joint. For example, longitudinal and circumferential fuselage joints are among the most highly loaded parts of an airframe, subject to loading each time the aircraft is pressurized. Over many flight cycles improperly installed rivets can loosen, permitting microscopic movement between overlapping fuselage panels. Such movement leads to fretting fatigue cracks resulting in early failure. The highly publicized rapid decompression of Aloha Airlines flight 243 in 1988 resulted from such fatigue cracks along the fuselage joints. These cracks eventually grew long enough to connect with one another and catastrophic failure resulted.

While the Aloha Airlines case represents a failure of maintenance and engineering personnel to anticipate the impact of multi-site fatigue damage, there are in fact many causes of premature joint failure, ranging from inadequate supplier quality control to defective installation practices.

Industrial fasteners are no less subject to quality or installation defects. Leaking roofs, sudden ladder and seat anchorage failures, corrosion, poor paint adhesion, and numerous other manifestations of poor fastener quality are avoidable with more attention to the manufacturing and installation details.

Poor fastener quality and installation practices are at the root of most, but not all, fastener failures. A misunderstanding as to how published strength allowables are established can also contribute to premature failure.

The discussion that follows briefly touches on these topics. While this paper pertains primarily to installation-formed fasteners, much of the information is equally applicable to conventional bolts, nuts and screws.

In the United States, most industrial fastener standards, specifications, and test procedures are written by the Industrial Fasteners Institute (IFI), the Society of Automotive Engineers (SAE), the American National Standards Institute (ANSI), or the American Society of Testing and Materials (ASTM). The National Aerospace Standards Committee (NASC) of the Aerospace Industries Association (AIA) provides the standards for the bulk of airframe hardware while the Society of Automotive Engineers (SAE) group E-9 writes standards and specifications for engine hardware. Some fasteners are still covered by Military Specifications and a few proprietary systems are covered by supplier or OEM (i.e., Boeing or Airbus) specifications.

Whether industrial or aerospace, most installation-formed fasteners were at one time proprietary in nature and the original supplier exercised significant influence in drafting the specification requirements. It is likely a result of this supplier influence that a certain number of defective fasteners are acceptable for shipment. For example, the NAS9300 series specifications for structural-grade blind rivets allow as many as 4% defective installations in each shipment. This is also the case for virtually every type of blind rivet and blind bolt supplied today (reference NAS1400, NAS1722, NAS 1740, MIL-F-81177 and MIL-F-8975). Specifications for highly-loaded pin and collar fasteners also permit a certain amount of defective fasteners per batch. The rationale is that the shop floor mechanic will catch these defects upon installation and remove them immediately. Unfortunately, this happens less frequently than one would hope. When these defects are not caught upon installation, they form the locus for potential early structural failure.

It is not unusual for a mechanic to “rework” a defective installation to avoid the tedious and time-consuming removal of the fastener. A favorite rework for blind rivets is to hammer down excessively-high blind rivet stems, which are meant to break flush with the rivet head, with the butt of the pneumatic installation tool. The resulting fastener looks OK, but the stem will not be adequately locked to the sleeve and premature failure (loss of the stem, loosening) is likely. This type of post-installation modification is easy to spot in that the stem component is easily moved up and down with respect to the fastener body.

Installation-formed structural fasteners are tested at suppliers’ facilities prior to shipment to ensure they are functioning as intended. This testing is usually performed in clean, dry panels with precision-reamed holes. In the field, however, the panels may be coated with wet sealant or primer which can adversely affect the installation quality by interfering with the fastener’s lubricant. Many applications require the mechanic to immerse the fastener into sealant immediately prior to installation. Dimensional and visual inspection of sealant coated blind fasteners is difficult at best, and the likelihood for defective joints increased. If these improperly installed fasteners are not rooted out by the mechanic, than structural failure can be expected.

The speed of installation can also influence the fastener installation. Consider the installation of a threaded pin and collar into two panels separated by viscous wet sealant. If a high speed nut runner is used to tighten the frangible threaded collar the sealant may not have time to flow out of the joint before the installation is complete. Over the next hour or so the sealant will continue to flow, resulting in a loss of clamp and a loose joint. Loose joints are more susceptible to fretting fatigue (as in the Aloha Airlines example) than are tight joints.

Sealant is widely used in the construction and aerospace industries. However, if it gets on threads it may significantly alter the torque-tension relationship. Cyclic-loaded “spongy” tension joints transfer more load to the fastener than do rigid joints, resulting in unanticipated fatigue failure. An aircraft cylinder head bolt fatigue failure caused by sealant on the threads recently resulted in two fatalities and the destruction of the light aircraft, according to a Probable Cause finding by the National Transportation Safety Board (NTSB).

All installation-formed fasteners have a very specific grip range over which the shear and tensile properties are assured. The packaging indicates this grip range, along with the recommended hole size. Nevertheless, the majority all improperly-installed fasteners are found to be installed out-of-grip or in oversized or poorly prepared holes. Either situation can result in premature failure of the fastened joint because strength properties are not assured unless the fastener is within grip and in the proper size hole.

Another problem area is use of the correct installation tool. For example, many mechanically-locked aerospace and industrial blind fasteners rely on a specially-configured tool nose piece to set a locking collar, or otherwise determine the proper setting of the fastener. If the nose piece is worn, or, more likely the case, a substitute tool is used, the fastener components may not be properly secured to one another and could un-expectantly loosen in service. As stated earlier, loose fasteners allow panel movement, leading to fretting fatigue cracks.

The installed properties of lock bolts and other high strength pin and collar fasteners are also sensitive to the tool condition: The degree to which a collar is swaged to a lock bolt pin’s locking grooves is dependent on the proper nose piece being used. Worn out tools may result in an installed part that looks great, but in fact will lack the strength required by the application.

The FAA/DoD Metallic Materials Properties Development and Standardization handbook (FAA/DoD-MMPDS) provides joint strength data for many popular aerospace and industrial fastening systems. Designers routinely use this data to select fasteners for structural joints based upon the predicted shear flow or other joint loading conditions. The static joint allowables in this handbook are based on testing in dry, precision-reamed test specimens. While statistical analysis is used to incorporate a certain margin of safety, it is highly unlikely that field conditions will replicate the test specimen quality. Rough-drilled holes, failure to account for sealant between panels, and inattention to the installed dimensions can easily result in static joint strength less than that predicted by the designer. Further, fastener designs and manufacturing sequences evolve over time, so joint properties obtained during initial testing may not be achieved, say, ten years later.

Note that quality conformance testing of many fastening systems does not include all tests performed during the initial qualification. In an age when continuous improvement is the rule, it is easy to imagine how several minor changes to a fastener’s manufacturing sequence and dimensional tolerances may have a negative influence on its installed properties. MMPDS recently enacted a “sunset” clause for aerospace fastener joint allowables, wherein suppliers must periodically provide substantiating test data showing that the fastener allowables are met with current production hardware. With the exception for a periodic sheet take up test on the NAS9300-series blind rivets, no such clause exists in any of the governing specifications for aerospace of industrial hardware.

Examination of fasteners in a failed joint will usually uncover any quality and installation defects. One should look closely at the hole size and hole quality first. Holes should be perpendicular to the panel surfaces within 1½° and hole surfaces should be free of burrs and deep scratches. Next determine whether the proper length fastener was used. In addition to strength grade and manufacturer’s identification, most blind fasteners have a grip length identifier stamped on the manufactured head. The examination should include the determination of any material removal from the fastener to enable installation in restricted spaces as well as whether supplemental lubricants were added or the original lubricants otherwise altered. Microscopic examination can reveal whether the fastener was tampered with after installation and scanning electron microscopy (SEM) can help determine whether the fastener and joint were subjected to environmental conditions outside the performance envelop.

The joint should be examined to see whether the panels were clinched tightly together. The origin of fatigue cracks and the number of load cycles can usually be determined via SEM. Intact fastener heads should be firmly seated in countersinks or against panel surfaces. The quality of surviving fasteners and their installation can provide clues as to the root cause of the failure.

Summary Unexpected failures of mechanically-fastened joints can oftentimes be traced to defective fasteners or their defective installation. Industrial and Aerospace specification allow a certain percentage of defective fasteners, and current sampling plans may not paint a true picture of the defect rate. The mechanic-installer is called upon to root out visually-defective fasteners upon installation, but it is often easier to mask defective installations then it is to remove them. Defective mechanically-fastened joints can fail without warning. A comprehensive understanding of fastener manufacturing sequences, materials, testing requirements and specifications can aide in getting to the root cause of these failures.