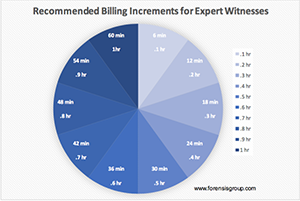 When determining how to document the work they have done and the amount of time each task has taken, expert witnesses, like attorneys, have certain options available.

In cases where an expert is paid on an hourly basis, there are different methods that are used to calculate and bill for the proper amount.

This article discusses some of those methods and addresses the potential advantages and disadvantages that may be involved with particular billing increment approaches.

The two most common ways of billing are by the tenth of an hour and the quarter of an hour.

In the first scenario, one-tenth of an hour would be represented as .1, and the client would be billed for six minutes.

In the second situation, the expert would bill in fifteen-minute increments, and so a final bill might reflect something like 3.25 hours, for example.

One thing is certain—when expert witnesses bill by the hour, it is absolutely critical that they not only track their time accurately, but that they document what each increment of time was spent doing so that clients can have a full accounting and understanding of exactly what they are being billed for.

With respect to billing in one-tenth increments, which is very prevalent, one legal analyst has made an observation; “The upside of the 1/10 hour system is that your time is going to be documented in finer detail, and you can show to your client with great precision how long a particular task has taken. On the other hand, monitoring your time to this level of detail is a serious burden, especially if you are working on multiple matters in a single day.” Id.

The precision is something which many clients appreciate, as they wish to know how their money was spent, but it can be difficult for an expert to track their time so meticulously.

However, there are tracking programs available, and it is also possible to simply track time by how much is spent in total (for example, 30 minutes), and then simply break it down into one-tenth increments when documenting that time.

Experts who operate on an hourly basis are required to track their time, so while tracking every six minutes (or one-tenth of an hour) may seem burdensome, it is simpler to just track the total time and then divide it up using the one-tenth increment system for billing purposes.

Another system that some experts use to document the time they spend for a client uses the one-quarter billing increment method.

One advantage to the quarter-hour system is that it may be easier for individuals to keep track of, and it may require less detailed documentation, as their work doesn’t need to be listed every six minutes.

As noted by one attorney,

“Using a quarter-hour measure greatly eases the task of recording accurate time, even when the entry is made several hours after the work was done. On the downside, it can result in some inflated charges, if you apply the quarter-hour measure to every little task. This can create serious client resentment, for good reason.” Id.

There are ways to manage such potential resentment, but they involve individual conscientiousness.

For example, because the quarter-hour system is not as precise, it is difficult to know what to do if; for example, twenty-five minutes have elapsed, as the question arises as to whether the expert should bill for one-quarter of an hour or two. One attorney suggests,

“For most clients I use the five-minute threshold as to what justifies a billing entry. I also bulk up all the multiple short tasks that take place in a single day, so that three short calls or emails will only result in one quarter-hour being billed. I generally round down whenever the time is less than half of the quarter-hour segments, and I don’t charge to receive emails where no work or reply [is} required.” Id.

Billing according to the quarter-hour system may be made easier and less likely to incur client anger if handled in this manner.

It is also important to note that sometimes, a particular method of billing may be requested or required. For example, some courts ask that court-appointed experts bill in one-tenth increments.

In addition, some clients, such as insurance companies or government agencies, may require the one-tenth billing method. See id.

Ideally, a universal system would exist with respect to what billing increment is standard, but it does appear that many members of the legal profession, including attorneys, judges, and others, have adopted the one-tenth approach, which is becoming the more prevalent of the two.

This may be partly because it is the best way to accurately bill a client and leaves less guesswork to experts who might opt for the one-quarter system. They wouldn’t have to calculate how much time to bill clients in cases where the amount of time spent is in between two quarter-length increments.

In contrast, the one-tenth system makes it possible be very precise with billing and accounting.

In either event, experts should be aware of the advantages and disadvantages of each method and should try to stay abreast of the trends in the legal field as to what measurement is most widely-accepted and appropriate.