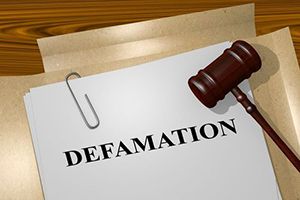 Defamation experts analyze allegations of slander (spoken statements) and libel (written statements) to determine if defamation of character or reputation has occurred. To win a defamation case, a plaintiff must show four things: 1) a false statement purporting to be fact; 2) publication or communication of that statement to a third person; 3) fault amounting to at least negligence; and 4) damages, or some harm caused to the person or entity who is the subject of the statement (Legal Information Institute).

Burke Ramsey filed a defamation lawsuit against the CBS network claiming that content in the 2016 television programs The Case of JonBenet Ramsey meets the elements of defamation of character. Charges have never been filed in the case of JonBenet’s death. It was revealed in the documentary that Burke struck his younger sister with a golf club a year before her death after “losing his temper.” Variety.com reports that Burke Ramsey’s lawsuit claims CBS and other defendants “predetermined the result” of the documentary. In Ramsey, Burke v. CBS Corporation, et al., the plaintiff alleges that the network, its production company and the experts interviewed for the series defamed him for publicity and profit. Burke is seeking $750M in the complaint filed in the Third Judicial Circuit of Michigan, Wayne County, (16-017577-CZ).

Defamation of character claims are difficult to prove. Defamation expert witnesses are trained to analyze the elements of slander and libel and determine if “false and intentional communication has harmed a plaintiff’s reputation or decreased the respect, regard, or confidence in which a person is held.” (http://legal-dictionary.thefreedictionary.com/). These professionals evaluate the evidence and provide an unbiased opinion to the court. Hiring a highly qualified defamation expert witness for your case is critical to the outcome.