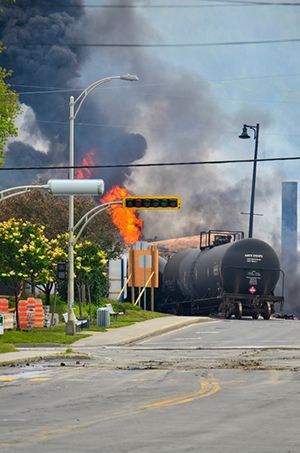 The U.S. Department of Transportation, Pipeline & Hazardous Material Safety Administration (PHMSA) collects data on incidents and accidents, which are then further classified into either ‘Serious Incidents’ or ‘Significant Incidents.’ Serious Incidents are those that result in either a fatality, or an injury requiring hospitalization. Significant Incidents are those which result in any of the following four circumstances: (1) property damage exceeding $50,000; (2) pipeline fire or explosion; (3) fatality, or injury requiring hospitalization; (4) release of 5 or more barrels of highly volatile liquid, or 50 barrels or more of liquid.

Explosions involving gas pipelines, whether deemed to be serious or significant, can occur for a variety of reasons. General public perceptions commonly lead to improper conclusions that pipeline explosions are the fault of gas companies, when in actuality there are many sources which can cause or contribute to pipeline explosions and fires. While gas companies are at times found to be at fault, pipeline incidents are more commonly the result of external factors, unrelated to gas company negligence.

Third party interference, such as excavation, is a common cause of gas pipeline accidents. Studies show that excavation is the leading cause of pipeline incidents, causing approximately a third of all serious incidents, and over a fifth of all significant incidents. Further, when considering the occurrence of all pipeline incidents, regardless of severity, the PHMSA reports that excavation was responsible for almost 60% of all reported incidents between 1995 and 2004.  Although excavation activities must be reported to local authorities prior to initiation, unfortunately this does not always occur. Excavation can also result in minor damage to underground pipeline systems, which excavators may be unaware of, or fail to report. Such damage can cause pipeline systems to be more susceptible to corrosion, which may result in future incidents.

Another cause involving third party interference is when a vehicle or other substantial object strikes a meter or regulator.  Additional third party causes of pipeline incidents include damage and deterioration resulting from chemicals. Such chemicals may be present due to improperly disposed of chemicals that have seeped into the ground, which can thereby cause damage to gas pipeline components. Although most pipelines are protected by a coating to prevent pipeline deterioration, such coatings do not protect against all contaminants.

Additional causes of pipeline accidents, not directly related to gas company liability, are defective pipelines, joints, valves, and other connecting or storage components of the pipeline system. Sometimes defects can occur during the manufacturing process. Other defects may concern the design process, and with most pipeline construction existing deep beneath the ground, such defects may not be discovered until an accident occurs. In some scenarios, lack of proper and adequate investigation, or the damage caused by the accident itself prevent recognition of underlying defects, whether in design or manufacture. Consequently, engineering and/or gas pipeline experts are often necessary to determine the probability of a defect as a potential source.

Natural causes can also contribute to, or cause, pipeline incidents. Natural disasters such as earthquakes, can cause extensive damage to both surface and underground pipeline distribution systems. Likewise, hurricanes and tornadoes have the same potential risk to cause extensive damage. Flooding is another natural disaster that can cause damage to pipeline systems. Large amounts of standing water caused by flooding often create the increased presence of microorganisms, such as bacteria and fungi. The byproducts from these microorganisms can produce microbiology influenced corrosion, which contributes to the breakdown in pipeline systems.

From the public safety, consumer, resident, or general public perspective, the companies having control over the installation and maintenance of gas pipeline systems, are commonly misconceived as being the parties most at fault. Accidents exhibiting gas company liability include improper installation; failures or omissions in inspection, maintenance, or repair; and violations of federal or state regulations, codes, and safety practices.

With so many potential sources for gas pipeline accidents, it can be difficult to determine the appropriate parties at fault. This problem is further complicated in accidents where valuable evidence may have been destroyed, or in cases where an inadequate investigation has been conducted following an accident. As such, employment of experts in the field of gas pipelines, pipeline engineering, and pipeline components, can provide valuable insight concerning the potential source of a particular incident. For example gas pipeline experts often provide important details concerning the specific type of pipeline involved in an accident, even when evidence has been destroyed or records are inaccurate. Likewise, pipe explosion experts can provide potential source data regarding a fire or explosion that may have been overlooked, such as a chemical explosion resulting from improper disposed chemicals, or unlawful fracking processes. Through consideration of the statistical data, and the beneficial expertise provided by pipeline experts, the general public may begin to realize that external factors, not involving gas companies, are the ultimate cause of the most pipeline incidents.