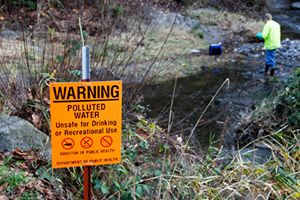 For the past 16 years, a client has been the owner of a residential property in the Sierra Foothills of Northern California. The client noticed that without supplemental irrigation, portions of his property were wet and green during the summer months. His house and granny flat septic systems were water logged and effluent was reaching the ground surface. The greening and septic problems coincided with the completion of a large development and construction of housing directly adjacent to his property.

An expert was retained by the owner to investigate the problem and formulate remedial options.  The engineering review concluded that the subsurface water was directly connected to irrigation of the public landscaping and individual housing landscaping. The expert  noted that the V-ditch separating the development from the  client’s property showed no evidence of water; this indicated that source of the water was subsurface and coming from either the soil/rock interface or fractured rock. In any event, it was directly associated with the development. The expert’s analysis concluded that this water will affect the septic systems, exert buoyant upward forces on the swimming pool and structures that may crack them and would reduce the bearing capacity of the soil.

A home inspector hired by the owner noted unusual non-seasonal moisture around the property, a lack of an adequate surface water diversion system, indication of high water under the house and moldy/musty smells. An arborist noted excessive water stressing trees and shrubs which could lead to their death.

After retention of counsel by the property owner, the expert hired eventually obtained access to the other expert report and documents not subject to public access.

The two major reports concerning the site were reviewed. The Geotechnical Site Investigation prepared for the development was useful in establishing the geologic setting of the area and specifically the site. This information was reviewed for the purposes of discovering how and why the subsurface water could flow onto the property. The developer’s expert report presented similar information but included the elements of the hydrological cycle that established the source of the water. Upon review of these two documents it was clear that the high groundwater on the property was caused by the development project.

Some of the information that supported the expert’s conclusions were:

Neither of the above reports or any other information reviewed indicate any action or lack of action by the client contributed or acerbated the shallow groundwater problem.

A review of the documents and site information convinced the expert that the development altered the natural landscape, no mitigation was constructed and the applied irrigation from public areas, from home landscaping and precipitation caused the high groundwater on the client’s property.

Discussion and Cost of the Fix

The expert concluded that the remediation of the high groundwater on the property could best be accomplished by structural means and not merely by changes in the watering practices. While minimizing applied water will reduce the quantity of water flowing toward the property, the storage capacity in the fills of the development was enormous. Further, it would not be reasonable to assume that long-term management of the applied water could even be a viable option given the private ownership of property up gradient of our client’s property.

The expert investigated connecting to the public sewer system; however, the costs and administrative requirements precluded this option.

The only viable remediation technique was construction and operation of an interception trench along the property line and in selected locations to intercept groundwater upgradient of the house and septic system. These locations were based on the establishment of a network of shallow monitoring wells throughout our client’s property. Preliminary design would consist of a multiple trench system consisting of the following elements:

A suit was filed and after numerous meetings and settlement conferences, this matter was settled.

Design drawings were prepared and submitted to the County for review. Construction was completed in August 2007 and the trench system is operating successfully. All of the monitoring wells showed a drop in water levels after the system began operation and the septic systems are operating properly.