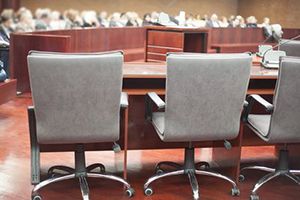 Many times, attorneys will consult expert witnesses, disclose the existence of such individuals to adverse parties, and even go so far as to depose them, but then, for various reasons, will determine that it is not of strategic benefit to call such experts at the actual trial.

In such cases, depending upon the rules of the particular jurisdiction, opposing counsel can sometimes take advantage of their adversary’s failure to call a witness at trial under the so-called “missing witness rule.”

This article discusses the history, applicability, and utility of the missing witness rule in various courts.

In order to understand the missing witness rule, it is helpful to become familiar with its origins.

According to one legal analyst, “the colloquial “missing-witness” rule—which developed from a century-old U.S. Supreme Court decision, Graves v. United States, 150 U.S. 118 (1893)—allows one party to obtain an adverse inference against the other for failure to call a controlled witness with material information.”  Michelle M. Rutherford, “Avoiding Application of the Missing-Witness Rule,” American Bar Association, Sep. 16, 2013.

The Graves case was a criminal case, though the rule has since become one that courts have utilized in civil matters as well.

The rule that Graves set forth (which is still in use today, albeit with more nuances and often stricter requirements) is that if a party has “control” of a particular witness, then non-production of that witness “creates the presumption that the testimony, if produced, would be unfavorable.” Graves v. United States, 150 U.S. 118, 121 (1893).

The rationale for the missing witness rule was initially quite reasonable. Rules of procedure and evidence did not exist to flesh out the best ways to obtain and protect important testimony and tangible evidence. See id, e.g.

Before the Federal Rules were enacted, the missing witness doctrine “supplied a necessary incentive for the parties to present a full picture of the facts.” Robert H. Stier Jr., “Revisiting the Missing Witness Inference—Quieting the Loud Voice from the Empty Chair,” 44 Md. L. Rev. 137, 141 (1985).

The best evidence rule’s influence on the missing witness inference is perhaps best explained by Justice Blackstone, who stated, “If it be found that there is any better evidence existing than is produced, the very not producing it is a presumption that it would have detected some falsehood that at present is concealed.” W. Blackstone, Commentaries 1326-27 (Lewis ed. 1922).

As for the rule concerning spoliation of evidence, the missing witness rule’s relationship with that concept is perhaps best explained as follows.“[A] party's failure to produce real and documentary evidence served as the model for courts confronted with an absent material witness.

Accordingly, the inference derived from the model follows a similar pattern: The nonproduction of a witness indicates that the party fears what the witness would say if called, from which the fact-finder may conclude that the content of the witness' testimony would be unfavorable to the party.” Robert H. Stier, Jr., supra.

In other words, the missing witness doctrine arose out of two thoughts “because it is hard to know whether the missing witness’s testimony would in fact be the best evidence but also because the bad-faith inference implicit in the spoliation doctrine is a heavy-handed remedy for simple failure to produce evidence.” Michelle M. Rutherford, supra, citing id. at 144.

The historical rationale for the missing witness inference was not unsound. In fact, “the focus of many courts on the control factor as either requiring the inference or forbidding it goes to origins of the rule.

The historical missing-witness rule attempted to prohibit concealment of evidence and encourage presentation of all relevant evidence.

In the absence of the discovery mechanisms in place today, it makes sense that if you control the evidence, you can conceal it and should be held responsible for the failure to present it.” Id.

In general, the adverse inference permitted by the missing witness rule is granted when: “(1) the witness is available to testify on behalf of or under control of the party; (2) the witness is unavailable in a practical sense to the opposing party; (3) the testimony of the witness would be relevant and noncumulative; and (4) no reasonable excuse for failure to produce the witness has been shown.” Id.

However, regardless of the standards that courts tend to agree upon when considering the missing witness inference, this does not make their application of it consistent whatsoever.

While some jurisdictions have specific provisions acknowledging the right of a party to request that a missing witness inference be given, others have rejected the doctrine outright.

As one analyst has noted, “Application of the rule...is anything but uniform.

In addition to variation across courts, even within circuits and states, application is varied.” Id.

What is particularly noteworthy is how this doctrine gets applied with respect to expert witnesses (as opposed to fact or lay witnesses). For example, when courts assess the “control” requirement, their analysis is quite divergent. See, e.g., id.

In Illinois state court, “expert witnesses are always considered to be controlled by the party who retained them unless they are abandoned before trial.” Id., citing Taylor v. Kohli, 162 Ill.2d 91, 97 (1994). See also Brian Murphy, “IPI 5.01: The Missing Witness Instruction,” ISBA Tort Trends, Jul. 2015.

However, when the Fifth Circuit Court of Appeals spoke in the context of expert witnesses and the Federal Rules of Evidence, it argued that “witnesses are not ‘controlled’ by either party.” Herbert v. Wal-Mart Stores, Inc., 911 F.2d 1044, 1048 (1990).

An approach that is somewhat in between that of Illinois and the Fifth Circuit is the one espoused by the Eleventh Circuit Court of Appeals.

While the Eleventh Circuit did appear to question whether a witness could be under any party’s control, it nonetheless applied the missing witness rule in a case where an expert had material information in a particular case. See Jones v. Otis Elevator Co., 861 F.2d 655, 658-60 (11th Cir. 1988).

Control may not be the only factor that various courts appear to disagree upon; disagreements over the application of the missing witness rule can even occur within a given jurisdiction.

Some courts have also focused on the cumulative aspect of the rule.

There is much disagreement regarding when or even whether the missing witness rule should apply.

The New Jersey court acknowledged that the missing witness inference is permitted in its jurisdiction but focused on two requirements for that inference to be made: control of an expert witness and the materiality or non-cumulative nature of the missing testimony. See id., at 131.

Even on the federal level, the application of the inference can be unclear. For instance, “even though the Sixth Circuit has stated clearly ‘[w]e agree with the Fifth Circuit that the ‘missing witness’ or ‘uncalled witness’ rule is inapplicable in federal court,” it later noted that “[f]ederal courts follow the ‘missing witness’ rule….’” Michelle M. Rutherford, supra. (“Compare Allstate Ins. Co. v. Shuler, 53 F.3d 331 (6th Cir. 1995) (holding trial court was correct to refuse to issue a missing-witness instruction),with Roberge v. Hannah Marine Corp., 124 F.3d 199 (6th Cir. 1997) (holding counsel’s reference to a missing class of possible witnesses as proper under the missing-witness rule.”))

Moreover, to further confuse matters, cases exist where trial courts have upheld the missing witness doctrine, even where their appellate courts have rejected the rule. See id.

Whether or not to apply the missing witness rule when expert witnesses are involved is a complicated matter.

As one attorney has explained, “The difficulty in applying this rule to expert witnesses, however, is the unfairness that can arise when the ‘missing’ expert has been deposed by and is equally available to the other party, whether through compulsory process (as in Hebert) or through the presentation of deposition testimony at trial if the expert is immune to compulsory service. Id.

Perhaps the best advice for litigators is to do their homework and to try to familiarize themselves with their specific jurisdictional practices on this matter as thoroughly as possible.

When the missing witness inference is available, attorneys should be aware of requirements for having that inference made and should prepare arguments to demonstrate that those requirements have been met.

Situations may arise in which an attorney had counted on making use of a missing witness inference but a particular court will not recognize that doctrine. In such cases, subpoenaing adverse witnesses who have not been called to testify may accomplish the same results as having a missing witness inference given and, in fact, may produce an even more powerful effect, as jurors can see the face and hear the answers of that witness, rather than simply imagining what would have been said.

For attorneys who are in the position of not wishing to call a witness who may provide less than desirable testimony, there are two measures that can be taken:

One is prophylactic, and that is simply to vet one’s experts carefully, familiarize oneself with the entirety of an expert’s opinion, and then only retain those that one can feel completely confident with. The second route attorneys can take, in the event that they have already retained and/or disclosed a potentially adverse expert, is to consider what approaches will either minimize or eliminate the risk of a missing witness inference.

Attorneys should “keep in mind how courts apply the control factor as well as its importance in both the history of the rule and the current analysis.

To the extent you have made your expert available for deposition and the opposing party can admit those portions of the testimony it wishes, especially where the expert is not subject to compulsory process, you may be able to avoid the adverse inference altogether because the witness is therefore “available” to be called by the other side.” Id.

Neither the federal nor state courts have a uniform approach with respect to how to handle the missing witness doctrine.

While some accommodate it, others reject it, and still others seem unsure as to how to handle the situation.

In any event, the best way for legal practitioners to prepare for such situations is to research their jurisdiction’s rules to the extent possible and to also make contingency plans in the event that, for whatever reason, those rules do not seem to apply to a particular case.

In addition, working with experts early and often will do much to mitigate or even eliminate the risks of potentially damaging testimony.